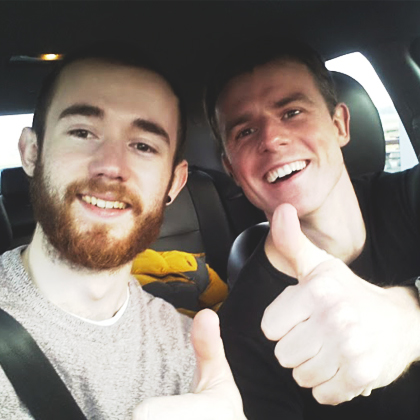 Meet our BlaBlaStar, Ryan. A BlaBlaStar is a member of the community who has caught our attention because of their exciting job, their interesting hobbies or for just being generally awesome. Tell us about The Grand Tour

My friend Tom Norman and I are writing a book called How To Travel The Land For Less Than A Grand. We left home with £1,000 in our bank accounts and went in two different directions to embark in The Grand Tour for some “research.” We wanted to see how long we could last using alternative travel methods around Europe, such as hitchhiking, couch surfing & using some travel tips we’d heard from others along the way. I started off in Berlin and managed to go to Wroclaw, Krakow, Budapest, Vienna, Bratislava, Prague, Soll, Innsbruck, Kempten & Paris over a period of two months. I ended up spending £15 on average a day which included every single expense you could imagine, I even managed to go skiing in the Austrian Alps, visit thermal spas in Budapest and try some of the best beers of my life. After two months away I’d spent only £977. We believe that travel can help to broaden your mindset and realise what direction you want to pursue in life. It helps you gain a great perspective on the world around you. We wanted to dispel the belief that you need huge sums of money to travel so we went out to show it could be done on less than £1,000


Why did you use BlaBlaCar to travel?

exciting than sitting on a train or bus trying not to bump shoulders with the person next to you, plus obviously it saves you a ton of money. I was going to Paris earlier in the year and to fly there would have cost over £100, and getting numerous trains wouldn’t be far off that either, so it was the perfect opportunity for me to use BlaBlaCar for the first time. I had a great time and was chatting to the other French passengers the majority of the way, I even tried out my French vocabulary on them but after I uttered a “Bonjour Monsieur” I realised I’d dried up on my French and so we continued in English! As soon as I got home I knew it would be the perfect way to travel around Europe. It just made more sense than any other mode of transport because it’s more friendly, cheaper and who knows what kind of stories and friendships could lead from it!

How many times have you used BlaBlaCar during the Tour?

During the Tour I used it three times from Berlin to Wroclaw in Poland, Krakow to Budapest and Paris to London. Tom used it from Vienna to Brno. Did you enjoy your BlaBlaCar experience?

Loved it. I actually kept in contact with one of the guys I met from the Krakow to Budapest journey and it turned out he was travelling in the UK so he came and stayed with me for a few nights and now we’re good friends! When you meet your driver you are usually greeted with a warm welcoming smile rather than the solemn stare of a coach driver that’s often so typical. Not only that but both Tom and I managed to get “selfies” with some of our BlaBlaCar drivers so it just shows how cool and easy-going they are.


Did you find BlaBlaCar was easy to use?

Yeah its very straight forward, much easier than booking a train ticket. Just put in the locations, click on the ride you want and arrange a meet up point with the driver, simples!


Will you be using BlaBlaCar again?

I will definitely be using it again the next time I want to travel.


Wish to know more about Ryan and The Grand Tour? Want to be the next BlaBlaStar?

Click below to submit your request! Tell us a bit about yourself and why you would make a great BlaBlaStar.
Become a BlaBlaStar